What Happened in May?

After posting the worst month of job losses in over seventy years, Minnesota added 9,800 jobs in May on a seasonally adjusted basis. This is a welcome sign of Minnesota’s nascent recovery, but the data show a steep climb ahead to reach full recovery.

Minnesota is still only at 87.3% of 2019 employment levels, and needs to add another 316,578 jobs just to regain all the jobs lost in March and April.

Compared to the U.S. economy, Minnesota employment fell slightly less far in March and April but had a slower initial rebound in May. The U.S. increased non-farm employment by 1.9% last month, while Minnesota posted a more modest gain of 0.4%. 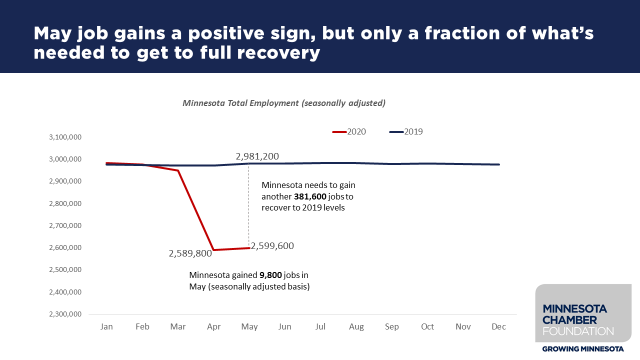 The strongest gains were in industries that suffered the largest losses last month.
This is encouraging in one sense as the hardest hit industries seem to be on the rebound. But the sheer size of job losses in those industries mean that many more months of such gains are needed to make up the losses. Additionally, gains in sectors like accommodation and food service and retail mask losses in some other sectors of particular importance to Minnesota’s economy like manufacturing, wholesale trade, management of companies (i.e. headquarters) and local government.

While Minnesota’s most concentrated sectors have continued to avoid the worst of the impact, they have also not experienced a rebound yet. The exception is health care and social assistance – one of Minnesota’s largest and most concentrated sectors – which added back 3,100 jobs last month, as elective services such as dental care, came back online. 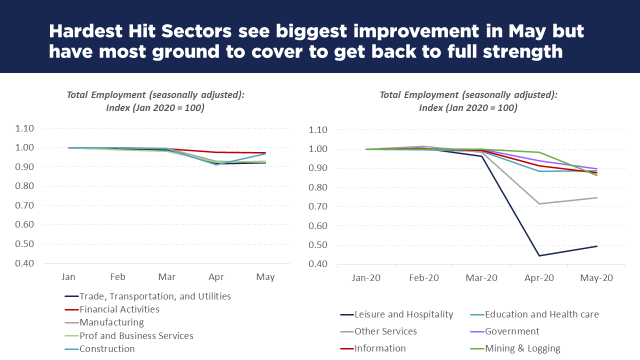 Rows highlighted in blue = Industries where Minnesota has above average share of jobs relative to the U.S. 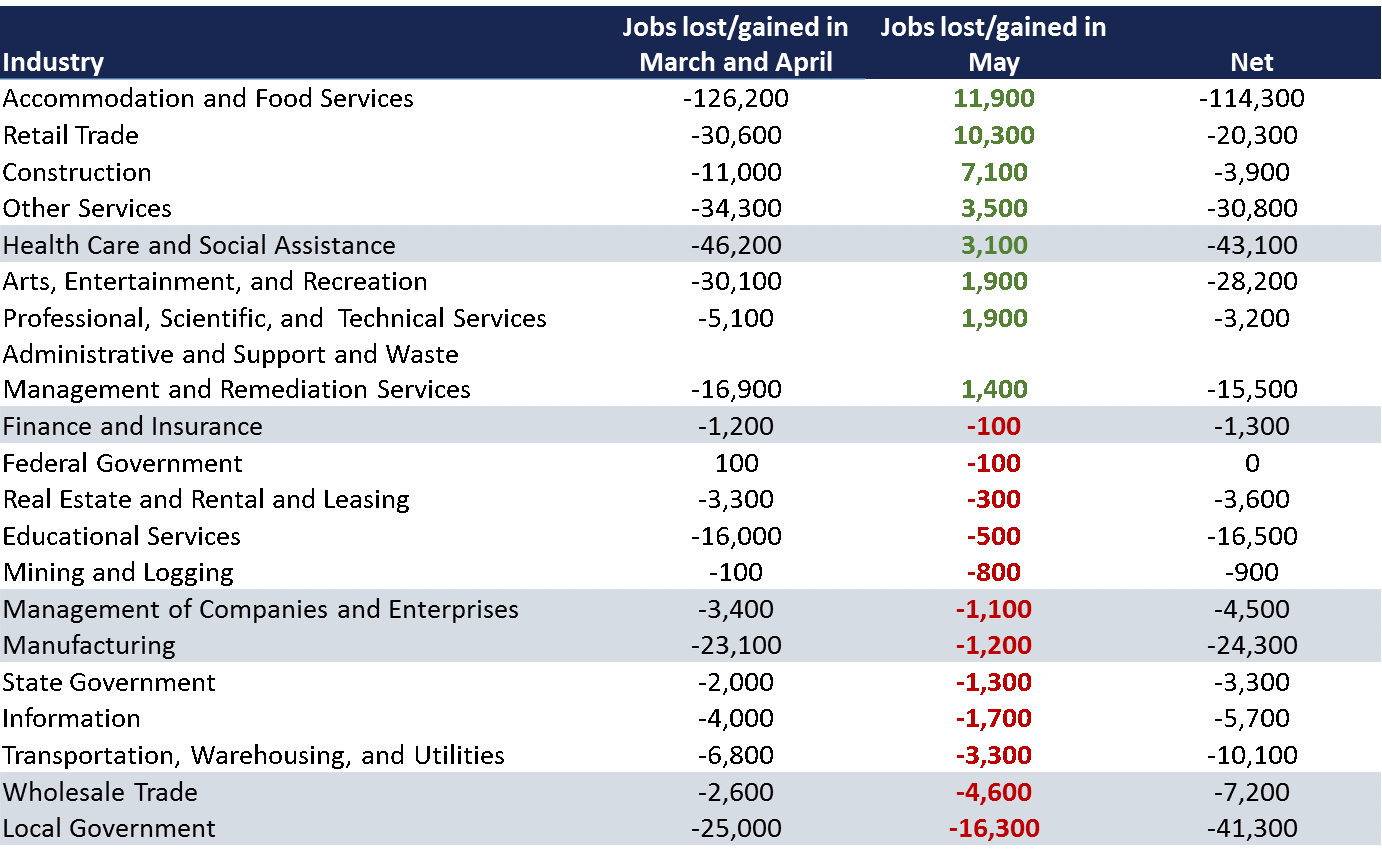 What do we see going forward?

To help inform our research, and guide business recovery efforts, the Minnesota Chamber Foundation partnered with IHS Markit to provide a short and long range forecast of Minnesota’s economy.

The findings of this report will be highlighted in a webinar on Thursday, July 9. Click HERE to register. The report will use macroeconomic modeling to show the range of possibilities in Minnesota’s short-term outlook. The report will also present some potential longer-term trends worth monitoring, as COVID-19 seems likely to leave us an economy different than the one we had before.

In addition, the Minnesota Chamber Foundation will release its MN: 2030 research project later this year that looks at how Minnesota is positioned for growth in the coming decade and what the state can do to maximize its economic potential. This longer term view for Minnesota’s economy will show the impacts of COVID-19, but also highlight opportunities for key industries and regions in the years ahead.

Join us for a timely snapshot highlighting the impact of COVID-19 on Minnesota’s economy and a forecast for recovery. The Minnesota Chamber Foundation will partner with IHS Markit, a leading source of economic data, to assess the sharp drop of economic activity since February, focus on key economic indicators and how Minnesota compares to the rest of the country. In this online event, experts will discuss details of key sectors and regions, and feature IHS Markit’s economic forecast for the months and years ahead. They will also touch on potential structural changes to Minnesota’s economy, and trends to watch as we move forward. 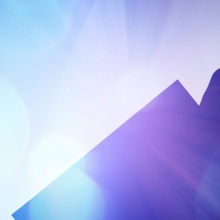 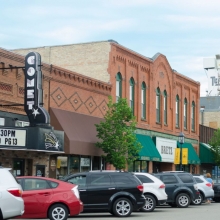 Find your community on this list, and apply for valuable resources to keep your company operating. If you don’t see...
Read More

Understanding the downturn leads us toward economic recovery 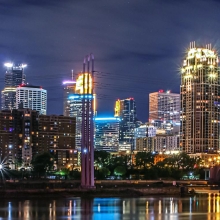 It’s hard to tell where we are in the COVID-19 journey. Four months after the first case in Minnesota, the...
Read More 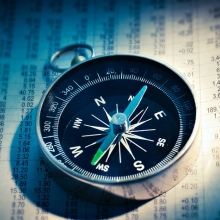